Name of  "Suruga Tengu" drives from confidence and pride of tea producing in traditional production areas.
"Suruga" is the former region name in central and eastern part of Shizuoka prefecture.
Long time ago, meister of tea artist has original high spec with own style was so called "Tengu".

Traditional tea creating style
Four tea farmers have own line of tea garden-to-tea factory.
They each produce a consistent production from farming.
It is a traditional tea making style.
The tea gardens of the traditional small personal farmhouse.
They produce quality which cannot follow by major tea maker. 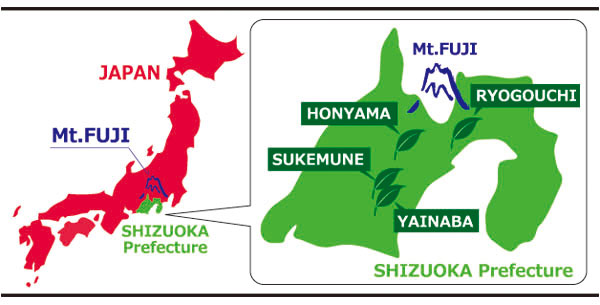 Progenitor of organic farming work in Japan
We have a history of organic farming movement in Japan.
In Japan we start the technical study session of organic cultivation for first time.
Our target is safe and tasty tea producing.
It is a very unique case that competitors cooperate with each other to advance in skill.
Our stans has been highly favoring by the consumer.

Next-generation quality of taste and nutritional value
Working up organic cultivation brings rich sweet constituent, vitamin-C and antioxidant with saving lower nitrates in tea leaves.
These are out-come of study and on science of organic technology for long years.
This is the quality of new Japanese tea on organic farming.


Our tea farming
That's because Shizuoka(Suruga）is particular about traditional region of tea.
Our associates are running top on way the organic world.